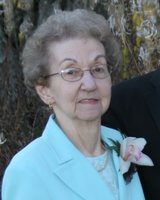 The death of Marion Morrison, age 93, occurred on Monday, February 3, 2020 at Shannex Embassy Hall, Quispamsis.  Born in Lower Cambridge, she was the daughter of the late Leigh and Gertrude (Davis) Slipp and wife of the late G. Winston Morrison.

Marion was a graduate of Normal School and taught in a one room schoolhouse in Cambridge-Narrows until her marriage.  She was a member of Central United Baptist Church and always took great comfort in her faith.

In lieu of flowers, remembrances may be made to Parkinson Canada, Diabetes Canada or to a charity of one’s choice.