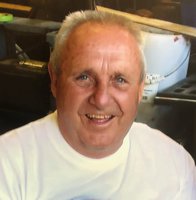 With heavy hearts, the family of Bobby Ring, beloved husband of Betty (Stein) Ring, announce his passing on Sunday, January 3, 2021 at the Saint John Regional Hospital. Born June 29, 1938 in Saint John, he was the son of the late Grenville and Margaret (White) Ring.

Bob was a legend in his own time. He was so many things to so many people. He shared his knowledge, friendship, his humour, his faith, his total acceptance of all- there was not a prejudice bone in his body. Bob had a wisdom and a heart that was filled with generosity, kindness, caring, sympathy, empathy, and a general love for life. He was “Old Man River”. A 4th generation Ring boat builder, he knew the river and its people like no other, and as the years and his health took over, his children exhibited the attributes that he passed on to them and their children. Betty was his rock; her kitchen and home was their kingdom. Our hearts are heavy with our loss.

Resting at Brenan’s Funeral Home, 111 Paradise Row, Saint John (634-7424). A Celebration of Bobby’s Life will take place at a later date this summer. For those who wish, remembrances to Bobby’s Hospice or a charity of the donor’s choice would be appreciated by the family. www.BrenansFH.com