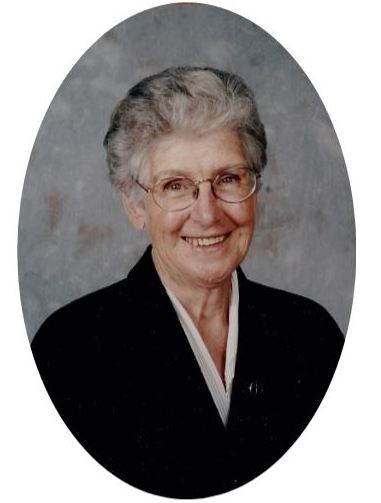 Sister Charlotte Gertrude Vickers (Sister Albert Marie) peacefully went home to her God on Friday, April 30, 2021 at Ruth Ross Residence in Saint John, NB. Born in Nelson-Miramichi on February 9, 1932, she was the daughter of the late Albert John and Emma (Burns) Vickers. A graduate of St. Michael’s Academy in Chatham, NB, Sister Charlotte went on to become a registered nurse via Hotel-Dieu de St. Joseph in Edmundston, NB. She was employed at Hotel-Dieu until she entered the Sisters of Charity of the Immaculate Conception in Saint John, NB on September 8, 1954.

Upon completion of her novitiate, Sister Charlotte nursed at St. Joseph’s Hospital in Saint John. She received her Bachelor of Science in Nursing Education from the University of Ottawa in 1964. For five years she was the Director of Nursing at Holy Family Hospital in Prince Albert, Saskatchewan. Returning to Saint John, she was the Director of Nursing at St. Joseph’s Hospital from 1969 to 1991. Retiring from nursing, she became the manager of Seton Court Apartments at St. Vincent’s Convent on Cliff Street.

She is survived by her sisters Alberta (Abud) and Joan (Kachel). She was predeceased by her parents Albert and Emma, brothers Allan, Albert, Benedict, William, Burns, Gerald and sisters Ella, Mary, Sister
Margaret, scic and Sister Alice, scic.

Resting at Brenan’s Funeral Home, 111 Paradise Row, Saint John, NB (634-7424). A Graveside Service will be held on Thursday, May 6 at 10 am at St. Joseph’s Cemetery, Saint John, NB. For those who wish, donations can be made to L’Arche Saint John. Online condolences may be placed at www.BrenansFH.com