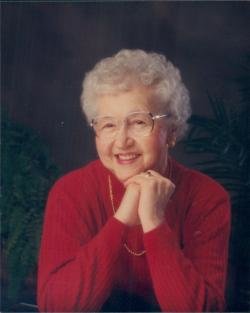 It is with broken hearts that we announce the passing of our dear mother, Estelle Parent, on February 13, 2018 at Rocmaura Nursing Home, 12 days after her 104th birthday. Born on February 1, 1914, she was the eldest and only daughter of the late Joseph and Marie (Gionet) Legere. She was a woman of strong faith and had a great love for St. Joseph. She had a sharp mind and a loving heart. The staff enjoyed her sense of humour, her wit, and her gentle soul. She was always concerned about family and friends. She lived for 40 years at Charlton Place until she was 103 and enjoyed many friendships there. In her early years she worked as a Nurse’s Aide in Bathurst and the TB Hospital in Saint John. She was an avid seamstress and knitter, lovingly making things for her children or grandchildren. She loved her family and her children were her life. She is survived by her 7 children: Priscilla Zed, Joanne Doucet, Linda Johnston (Ron Yaschuk), Gerard Parent "Junior", Muriel Willard, Dennis Parent (Carolyn), and Elizabeth "Liz" O’Brien (Paul); 18 grandchildren: Peter Zed, Derek Zed, Joanne Murphy, Angela LeBlanc, Gina Barton, Carolyn Hussey, Michael Johnston, Elizabeth Johnston, Michelle English, John Parent, Christopher Parent, Jennifer Gould, Jamie Willard, Mark Arsenault, Zachary Parent, Jesse Parent, Leanne O’Brien, and Allison O’Brien; and 26 great-grandchildren. She is also survived by brothers: Nicholas (Jean), Alcide (Sharon), Hermel, and Hedard; and special cousin, Leonard Gionet (Edna). She was predeceased by her sons-in-law, Ron Zed Jr., Reg Doucet, and Doug Johnston; and daughter-in-law, Elaine (Gauthier) Parent; great-grandson, Scott Lloyd O’Brien; step-mother, Marie Lanteigne; brothers, Lionel, Henri, Ben, Gerard, Jean Eudes, Cajeton; and special cousin, Armandine Chiasson. Resting at Brenan’s Funeral Home, 111 Paradise Row, Saint John (634-7424), with visiting on Friday, February 16, 2018 from 2 to 4 and 6 to 8 pm. A Mass of Christian Burial will be celebrated on Saturday, February 17, 2018 at 10 am from St. Pius X Parish. Interment will follow in St. Joseph’s Cemetery. Remembrances to a charity of the donor’s choice would be appreciated by the family. www.brenansfh.com.

Share Your Memory of
M.
Upload Your Memory View All Memories
Be the first to upload a memory!