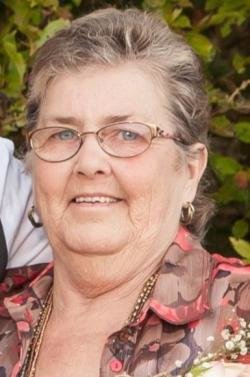 It is with great sadness and heavy hearts that the family Marion Elizabeth Cameron announces the passing of their Matriarch, which occurred on Thursday, February 22, 2018 at the Saint John Regional Hospital. Born in Saint John on November 12, 1949, she was a daughter of the late Arthur and Doris (Clayton) Bustard. She was the loving wife of the late John T. Cameron who passed away in 1994. Marion fought a courageous battle with cancer for almost eight years. Her strong spirit and bright personality helped her to smile through it all. Her personality made her easy to love by everyone she met. To Marion, family was the most important part of life. As well as being a wonderful mother, she was also an adoring grandmother and great-grandmother. Marion will be missed by her daughters: Robin Hanson (Russ), Roxanne Pye (Danny), Kim Scullion (Jason) and Tammy McGaughey (Neil); her grandchildren: Russ (Amelia), Dereck (Amanda), Shayne and Sydney: great-grandchildren: Mason, Jack, Hailey, Paisley and Monroe; her siblings: Gary Bustard (Irma), Fred Bustard (Dianna), Judy Vinqvist (Les), Nancy Fillmore (Scott) and Jeannie Perry (Paul); her beloved four-legged canine friend, Nike; as well as several nieces, nephews and friends. In addition to her parents and her husband, Marion was predeceased by an infant son, John Edward Cameron; and a sister, Anita McKay. Arrangements are under the care of Brenan’s Funeral Home, 111 Paradise Row, Saint John, NB (634-7424). Family and friends are invited to attend a Celebration of Marion’s life, which will be held on Monday, February 26, 2018 at 12:00 pm from Brenan’s Funeral Home Chapel. Interment will take place at Cedar Hill Extension Cemetery. For those who wish, remembrances may be made to Bobby’s Hospice, IWK Children’s Hospital, or a charity of the donor’s choice. Online condolences may be placed at www.BrenansFH.com

Share Your Memory of
Marion
Upload Your Memory View All Memories
Be the first to upload a memory!