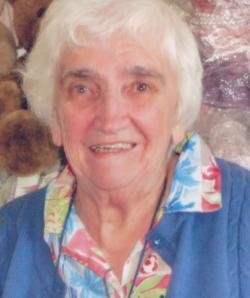 It is with heavy hearts the family of Leona Emily Pottle announce her passing at Kingsway Care Centre on Saturday, February 24, 2018. Born in Saint John on April 15, 1923 she was a daughter of the late George W. and Nellie (Barton) Pottle. Before retirement Leona worked at G.E. Barbour Co. She was very active in her community at the Loch Lomond Villa, including serving with Meals on Wheels and on the Residents Council. She enjoyed sports as a spectator and was a passionate Toronto Maple Leafs fan. Leona is survived by her brothers: George R.T. (Frances) Pottle and Arthur Pottle; nieces: Frances, Gwen and Janice; nephews: Bob, John, Mark, Kent, Carl and Andrew; 15 great nieces and nephews and three great-great nieces and nephews. In addition to her parents, she was predeceased by her infant brother Murray and sister in law Connie Pottle. Arrangements are under the care and direction of Brenan’s Funeral Home, 111 Paradise Row, Saint John, NB (634-7424) with visitation on Tuesday, February 27, 2018 from 2-4 and 6-8 PM. A Memorial service will be held at Brenan’s Chapel on Wednesday, February 28, 2018 at 1:00 PM. Interment will take place at Cedar Hill Cemetery, 476 Lancaster Ave, Saint John West at a later date. For those who wish, remembrances in memory of Leona may be made to the Loch Lomond Villa Foundation, Kingsway Care Centre or a charity of the donor’s choice.

Share Your Memory of
Leona
Upload Your Memory View All Memories
Be the first to upload a memory!