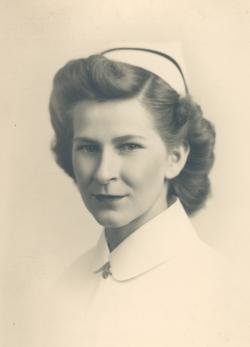 It is with heavy hearts that the family of Mary "Mona" Riley announces her passing, which occurred on Sunday, February 25, 2018 at the Shannex Nursing Home – Embassy Hall. Born in Saint John on December 7, 1921, she was the daughter of the late John Thomas and Mary Ellen (Keohan) Riley. Mona was a graduate of St. Vincent’s High School and St. Joseph’s Hospital School of Nursing. She was a Major in the Canadian Armed Forces (Air Force) for almost 30 years. In her younger years Mona was quite active in the Westfield Golf Club. Until her passing she was still an active member in the Air Force Association, St. Joseph’s Nurses Alumni, and the Union Club. Mona was an independent, fun loving and quick witted sister and aunt. She joined the Armed Forces to see the world and that is precisely what she did. She was stationed in England and Germany and came back from overseas with a brand new Karman Ghia sports car. She had various postings throughout Canada, such as, Whitehorse, Greenwood and Trenton. She also loved to travel and had many trips to Bermuda and Ireland. Mona loved to golf and play bridge in her retirement. She was a devoted sister who cared for her mother and brothers. Mona was a good friend and in particular shared wonderful times with her best friend, Mary Riley and her family. Mona was a unique lady with a flair for life. She bought herself a new Mazda Miata sports car when she was well into her eighties and drove it until her ninetieth birthday. Mona will be missed by her many friends in particular, Rose Riley, Darlene Toner, and the Riley girls: Karen, Kathleen and Maura. Mona will be especially missed by her devoted nephew Peter Riley and niece Barbara Riley whose visits and outings with Mona will be remembered fondly. Mona is survived by her sister-in-law, Mary Riley along with several nieces, nephews and friends. In addition to her parents, Mona was predeceased by her brothers: Dr. John Riley, Fr. Raymond Riley, Fr. George Riley, Donald Riley (Melissa) and Frank Riley (Marie). The family would like to thank the doctors and caregivers at the Shannex Nursing Home - Embassy Hall for the excellent care they provided Mona. Arrangements are under the care of Brenan’s Funeral Home, 111 Paradise Row, Saint John, NB (634-7424). Visitation will be held on Wednesday, February 28, 2018 from 2 pm – 4 pm and 6 pm -8 pm. A Mass of Christian Burial will be held on Thursday, March 1, 2018 at 12:05 pm from St. Rose of Lima Parish, 541 Milford Road, West Saint John. Interment to follow at St. Joseph’s Cemetery. For those who wish, remembrances may be made to Romero House or a charity of the donor’s choice.