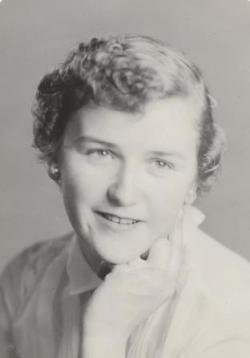 It is with great sadness that the family of Joan Violet Burgess announce her passing, which occurred on Thursday, March 1, 2018 at her residence. Born on June 19, 1935 in Saint John, she was a daughter of the late Collingwood and Sarah (Russell) Burgess. Joan worked at IGA and Eastern Bakeries for many years and loved her job as a cake decorator. She loved to spend time with her family and especially enjoyed being around the little ones. She will be missed by all who knew her. Joan is survived by her nieces, Joan Cosman (Stewart) and Claire Hickman (Douglas); great-niece, Jennifer McFadden (Richard); great-nephews, Derek Cosman (Stacey Downey), Mark Cosman, Greg Hickman and Josh Hickman; great-great-nieces, Maria and Isabella Cosman, Claire, Heidi and Lily McFadden; great-great -nephew, Philip McFadden and brother-in-law, Donald Phillips. In addition to her parents, Joan was also predeceased by her sisters, Ruth Burgess and Edith Phillips. Arrangements are under the care and direction of Brenan’s Funeral Home, 111 Paradise Row, Saint John (634-7424). In keeping with Joan’s wishes, there will be no visiting or funeral service. A private graveside service will be held at a later date. For those who wish, remembrances may be made to a charity of the donor’s choice.