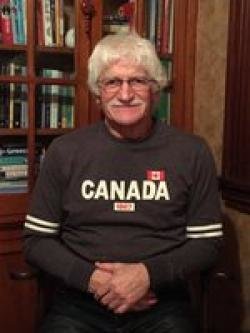 Burial Date: At a Later Date

Imrich Kiraly, age 71, of Yarmouth, passed away unexpectedly on February 7, 2018. Born in Pilisszántó, Hungary and raised in Czechoslovakia, Imrich was the son of the late Imrich and Katrina Kiraly. He moved to Ontario in 1969, and then to Yarmouth in 1997. Imrich had a gentle soul, he was kind, caring and loving, he was an excellent listener who could give advice when asked for and was without judgement. Imrich spent the last 10 years of his career as a massage therapist in Yarmouth before retiring. Imrich had a great enthusiasm for track and field throwing events. Competing as a master's athlete in shot-put, discus, javelin, and hammer throw, Imrich won an extraordinary number of national and provincial medals. His achievements include but are not limited to 13 provincial masters’ records, spanning across three different age groups, and an induction into the Yarmouth Sports Hall of Fame in 2017. Imrich also enjoyed playing golf and oldtimer’s hockey. He is survived by his loving wife Robbi Seale; sons, Michael (Reanie), Kris (Stacey and grandson Austyn ); Alex ; brother, Joseph (Barbara), Aunt Mici Kruppa, all of Ontario. Funeral arrangements have been entrusted to Sweeny’s Funeral Home and Crematorium in Yarmouth . A celebration of Imrich’s life will be held Wednesday March 7, 2018 at 7 P.M. in Sweeny’s Funeral Home Chapel. The service will be webcast to Brenan's Funeral Home on Paradise Row at 7 pm in Saint John NB and the Henry Walser funeral home on Fredrick St in Kitchener Ontario at 6 pm. Internment will take place at a later date. In lieu of flowers, donations may be made to the JStrong Fund at http://jstrongfund.com/index.html. On-line condolences may be sent to: Sweenysfh@eastlink.ca or you may sign the guestbook on-line at: www.sweenysfuneralhome.net

Share Your Memory of
Imrich
Upload Your Memory View All Memories
Be the first to upload a memory!