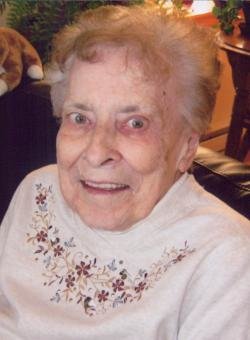 It is with heavy hearts the family of Dora Edith Barton, loving wife of the late Cyril Frederick Barton, announce her peaceful passing, which occurred on Saturday, March 10, 2018 at the Church of St. John and St. Stephen Home. Born on march 6, 1924 in her home in French Lake, NB, she was the daughter of the late Duncan and Wealthy (Foster) Foss. Dora is survived by her daughter Brenda Charlton and her husband Stephen; her granddaughter Laura Charlton and grandson Kyle Charlton and his wife Erica; Her brother Chester Foss and sister Ethel King; brother-in-law Berlyn Carr and sister-in-law Dorothy Foss as well as many nieces and nephews, including special nephew, Stephen Carr. Aside from her parents and husband, Dora was predeceased by her daughter Elizabeth Ann; brother Judson Foss; sisters Cecelia Foss, Zelda Burgoyne, Mabel Carr, and Frances Foss in infancy; brothers-in-law Ray Burgoyne and Myrvin King and sister-in-law Florence Foss. The family wishes to thank all the staff at the Church of St. John and St. Stephen Home for their wonderful care of mom and their compassion. Resting at Brenan’s Funeral Home, 111 Paradise Row, Saint John, NB (634-7424), with visitation on Friday, March 16, 2018 from 2-8 PM. A funeral service will be held in the Brenan’s Chapel on Saturday, March 17, 2018 at 11:00 AM. Interment to follow at Fernhill Cemetery. In lieu of flowers, the family would appreciate donations in Dora’s memory be made to the Church of St. John and St. Stephen Home, the SPCA, or to a charity of the donor’s choice. Online condolences can be made at www.BrenansFH.com.

Share Your Memory of
Dora
Upload Your Memory View All Memories
Be the first to upload a memory!