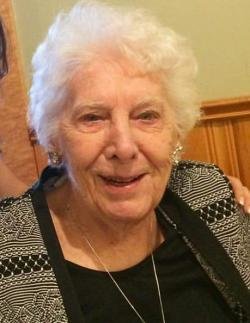 It is with heavy hearts that the family of Dorothy Etta Walker (Wilson), wife of the late Jack Edward Walker, announce her passing on April 2, 2018 at the Saint John Regional Hospital. Dorothy was born in Falmouth, N. S. on March 29, 1929. She was the daughter of the late George and Mabel Wilson. Dorothy will be sadly missed by her daughter, Jacqueline (George) Wiley, Son, Stephen George Walker (Kim Shaw), Grandchildren: Michael Wiley, Jessica Wiley, Nicola (Chris) Sleep, Christina Walker, and great granddaughter, Cali Sophia, her sister Frances Anne(George) Christie and their children Philip and Linda, Collingwood, Ontario as well as nephews Bill and Bob. Special Thanks to all of her friends at Jubilee and Concorde Hall at Shannex in Quispamsis for their friendship and support. Arrangements are under the direction of Brenan’s Funeral Home, 111 Paradise Row, Saint John (634-7424) In keeping with Dorothy's wishes, there will be no visitation. A memorial service will be held at St. James the Less Church, 1760 Rothesay Road, Rothesay on Wednesday, April 4 at 11 am. In lieu of flowers, donations may be made to the Canadian Cancer Society, the Heart & Stroke Foundation or a charity of the donor's choice.

Share Your Memory of
Dorothy
Upload Your Memory View All Memories
Be the first to upload a memory!