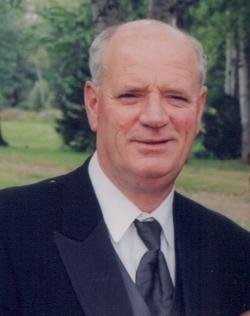 Burial Location: A Family graveside service at a later date

With his loving wife of 46 years, Leta (Nealis), by his side, David Lorne Culley passed following a courageous battle with cancer on April 4, 2018. Born on April 17, 1947 in St. Stephen, NB, he was a son of the late Arthur and Louise (Flewelling) Culley. Along with his wife, he is survived by his cherished daughters Rochelle and Shyanne and their greatest gifts to him, his grandchildren, Nathan and Kate Belyea and Ashton and Devon Robichaud. He is also survived by his brother Larry (Marlo), sister Elaine Dawson and honorary son Kolin Henderson, sisters-in-law Diane Nealis (Doug May) and Cheryl Nealis and brother-in-law Dr. Vincent Nealis (Liz), along with several nieces and nephews. Besides his parents, David was predeceased by his sister Shirley Mawhinney and nephews Teddy Hoyt and Craig Culley. David had many interests, with time spent in his early years hunting and fishing at his camp in St. Martins. His home was his sanctuary, from the hobby farm for orphaned animals to his workshop where he spent many hours building cradles, sleds and toys for the grandkids, to tables, stools and serving boards with his signature Birds Eye Maple. He cherished his many friendships, from the Saint John Police Force where he gave 34 years of service, to the locker room pals at the Aquatic Centre and his coffee buddies at Tim Hortons where many world problems were solved. Many of you chose to take this journey with him through your many visits, phone calls and cards of encouragement over the past two years. He cherished these special moments and for that he and his family will be forever grateful. Arrangements have been entrusted to Brenan’s Funeral Home, 111 Paradise Row, Saint John (634-7424). At David’s request, there will be no visitation or funeral. He would rather you remember the good times shared and do something special with a loved one in his memory. A family graveside service will take place at a later date. For those who wish, donations in David’s memory may be made to the Silver Falls United Church Brown Bag Lunch Program, your local SPCA, Tim Hortons Children’s Foundation or a charity of donor’s choice would be appreciated.