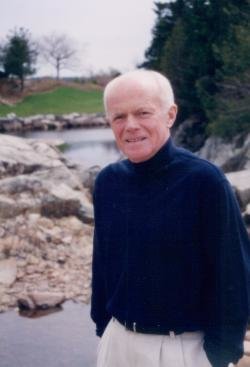 It is with great sadness the family of Douglas "Doug" Schurman Wilson, announce his passing on Friday, July 13, 2018. He was born in Saint John on March 2, 1943, one of two children born to the late Carvell and Marguerite (Schurman) Wilson. Educated at Rothesay Collegiate School, Doug was employed with the City of Saint John, until retiring in 1996 as Superintendent of the Water Department. He enjoyed trips in his Corvette, was an active pool player and had many fond memories of his years at Keenes Lake Campground. Doug was a Master Mason and Shriner having become a Mason in 1972 and he was an active member and past president of the Corvettes of Southern New Brunswick. He is survived by his loving wife of 25 years, Nancy (Farquharson); daughter, Kim (Mike) Clark; sister, Brenda Wilson; step-daughter, Trish (Eric) Boucher; grandchildren: Madison Clark, Adam Clark, Max Boucher and Spencer Boucher. In addition to his parents, Doug was predeceased by his first wife Nancy (Zed) and grandson Lucas Clark. The family would like to thank Dr. Samantha Gray, Dr. Bridget Tutschka, the Staff of Bobby’s Hospice and the wonderful care received from the Saint John Regional Hospital and the Extra Mural Team. Arrangements are under the care of Brenan’s Funeral Home, 111 Paradise Row, Saint John (634-7424) with visiting on Tuesday, July 17, 2018 from 2-8 pm. The New Brunswick Lodge # 22 - Freemasons will be conducting a Masonic Service at 7:00 pm on Tuesday. A Mass of Christian Burial will be held on Wednesday, July18, 2018 at 12:00 noon from Our Lady of the Assumption Parish, 360 Dufferin Row, Saint John, NB. Interment to take place in St. Joseph’s Cemetery at a later date. In lieu of flowers, the family would appreciate donations to Bobby’s Hospice or a charity of the Donor’s Choice.

Share Your Memory of
Douglas
Upload Your Memory View All Memories
Be the first to upload a memory!