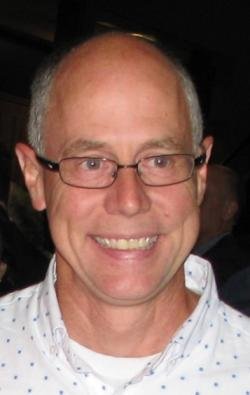 With heavy hearts, the family of Peter William Hoellwarth announce his unexpected passing on Saturday, July 14, 2018. Born on October 25, 1963 in Montreal, Peter became a true West Sider when his parents moved to Saint John at age 9. He spent his youth in Greendale where he made many life-long friends. An enterprising and hard-working young man, Peter purchased a lawn-mower and snow-blower with his own money when he was 16 years old and began working for his neighbours who came to depend on him. People who know Peter are not surprised to learn that both pieces of equipment were used for almost 40 years. Peter grew up in the Catholic faith and was a lifelong member of St. Rose Parish, graduating from Saint Malachy’s High School in 1981. He continued his education at the Saint John campus of the University of New Brunswick, obtaining a Bachelor of Business Administration. After working for a time with Labatt’s Brewery, Peter began a career with State Farm. As an insurance adjuster, he was well-respected for his knowledge, professionalism, and kindness to his clients in their time of need. Along with his wife, Stephanie Acker Hoellwarth, Peter is survived by his daughters, Emilee and Sarah, both at home. He is also survived by his parents, Gunter and Theresia (VanLeuven) Hoellwarth of West Saint John; his sisters Nora (Kevin) Boudreau of Quispamsis and Ingrid (Graham) Rossiter of Kansas; Stephanie’s parents, Dr. John and Rosalee (Richard) Acker of Rothesay; sisters in law Jennifer (Freddie) Claro of Japan, Heidi (Kevin) White of Saint John, Wendi (Thumper) McDonald of Darling’s Island, and brother in law Chris Acker of Quispamsis; nieces and nephews Jessica and Josh Boudreau, Brandon and Tristan Claro, Jessica and Jenny Acker, Jack and Nick White, and Oliver and Evelyn McDonald. Peter’s family wish to extend their thanks and appreciation to the members of the Saint John Police Force, Saint John Fire Department, RCMP, ground search and rescue teams from all over New Brunswick, and the hundreds of volunteers for their efforts. The goodwill, kindness, love and affection shown to the family will not be forgotten. Arrangements are under the care of Brenan’s Funeral Home, 111 Paradise Row, Saint John, (634-7424) with visiting on July 23, 2018 from 2 to 8 pm. A Mass of Christian Burial and Celebration of Peter’s Life will take place at St. Matthew’s Catholic Church, 45 Dollard Drive, on July 24, 2018 at 11 am. Family flowers only. Please make a donation in Peter’s memory to the Charlotte County Ground Search and Rescue team.