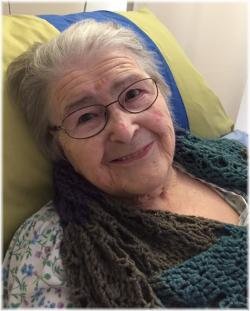 Surrounded by her loving family, Anna Gallagher Kilfoil passed away peacefully July 19th, 2018 at Rocmaura Nursing Home, leaving behind a legacy of love, faith and grace. Anna Marie was born on October 1st, 1921 at Johnville, N.B., the second daughter of the late John Archibald Gallagher and Mary Elizabeth Brennan. At two years of age her family moved to Bath, where she received her elementary and high school education. Following high school Anna graduated (RN) from the L.P. Fisher Memorial Hospital School of Nursing, at Woodstock N.B., in 1944. She began her nursing career on the staff of the Bath hospital and did private duty nursing as well. She married Bill Kilfoil in Bath in 1947. They spent the first years of their married life in Saint John and the remainder in Fredericton, where Anna became active in St. Dunstan's Church affairs, particularly in the field of charitable services. Anna had a special affinity for the underprivileged and she volunteered for many years in the operation of the St. Vincent de Paul Society clothing bank, exemplifying the selfless and compassionate nature that characterized her life. Anna put her family first and her trust in God, welcoming all who came to her door. She retained her lively sense of humour, strength of character and generous spirit throughout her life. Anna, the last surviving member of her family, was predeceased by her husband William Patrick, brothers Billy (Eileen), Johnny (Marie) and Joe (Maxine; Connie) and sisters Frances Borkowski (Henry), and Teresa Boyd (Basil). She is survived by three daughters, Mary McDevitt (Bob) and Anne, both of Saint John and Conni of Surrey, B.C.; two sons, William (Yvonne) of Mineville, N.S. and Joseph of Fredericton; nine grandchildren: Krista McDevitt and Katie McDevitt both of Saint John, Kara of Calgary, Matthew of Saint John, Colleen McCarville of Porters Lake, N.S., Mark of West Chezzetcook, N.S., Brennan of Porters Lake, N.S., Kimberley of Windsor, N.S., and Kerry Paterson of New York; fifteen great- grandchildren: Sophie and Patrick Gauthier, Brennan and Joe Martin, Charlotte, Beckett and Ellen Steeves, Liam and Anna Kilfoil, Aaron, Alice and Emily Kilfoil, Hannah, Caelum and Jeannette McCarville and William, Olivia, Owen and Ellis Sanford. Anna was well loved and will be greatly missed by everyone who had the privilege to meet her especially her large extended family and her dear friends and neighbours at her Fredericton apartment. Anna's family wishes to express sincere appreciation and gratitude for the loving care and support she received from the staff at Rocmaura. Visitation will be held on Sunday, July 22nd, from 6:00 - 8:00 pm at Brenan's Funeral Home, 111 Paradise Row in Saint John and on Monday, July 23rd, from 10:30 - 11:30 am at St. Dunstan's Catholic Church in Fredericton. A Mass of Christian Burial will be celebrated at St. Dunstan's Catholic Church at 12:05 pm, Monday, July 23rd, 2018 with Fr. Bill Brennan as celebrant. Interment will take place in the Hermitage Catholic Cemetery, Fredericton. In lieu of flowers, donations may be made to Rocmaura or a charity of choice.

Share Your Memory of
Anna
Upload Your Memory View All Memories
Be the first to upload a memory!