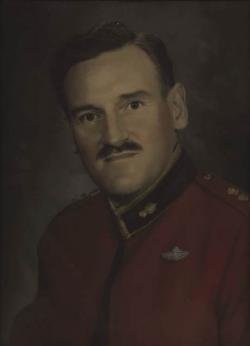 It is with great sadness that the family of Francis "Frank" Joseph Ronald Ervin, CD, announces his passing on July 22, 2018. Frank was born in Saint John on January 23, 1926. He was the only child of Frank C. Ervin and Rose (McFadden) Ervin. Frank was predeceased by his wife of 49 years, Doreen "Dee" (Williams) Ervin. He is survived by his five sons: Michael (Karen) of North Saanich, BC, Patrick (Nancy) of Rothesay, Dr. Francis (Denise) of Maple Ridge BC, Rory (Fairlie) of Saint John, and Shane (Ann) of Saint John. He also leaves behind his grandchildren: Brendan, Stephanie (Adam), Adrienne (Aaron), Arianna, Kristin (Vic), Michelle (Adam) and Marjory (Jason), and great-grandchildren: Elizabeth, Benjamin, Christian, Izabelle, Maddison, Zisha and Chaim. Frank enlisted in the Canadian Army in 1944. After the war, he attended St. Thomas University, graduating with a Bachelor of Arts in 1950. He then re-enlisted and began a 24 year career as an Artillery officer. He was a junior officer and paratrooper in the "Light Battery", an airborne unit in Shilo, Manitoba. He served as a regimental officer in post-war West Germany and as a staff officer in Montreal. In 1964, then as Major Ervin, he assumed command of ‘A’ Battery of the First Regiment, Royal Canadian Horse Artillery based in Camp Gagetown. In 1967, Frank was posted to Israel to serve as a United Nations observer in the Golan Heights, spending one year away from his family. There, he was part of a multi-nation team of officers, tasked to patrol and observe Israeli and Syrian military operations. His final posting was to Saint John in 1970, where he served as Deputy Commander, Western New Brunswick Militia District. Frank retired from the Canadian Forces in 1974. His military honours included the Canadian Forces Decoration (CD) and the United Nations Truce Supervision Organization (UNTSO) medal. Upon leaving the forces, Frank began a 17-year career as the full-time Executive Director of the United Way of Greater Saint John. Following his retirement in 1991, Frank and Dee enjoyed spending their winters in Florida. Both during and following his two careers, Frank was a dedicated volunteer in many organizations and initiatives. Frank’s community involvement included the Saint John Rotary Club, Royal United Services Institute, Council for Canadian Unity, Governor General’s Study Conference, and the Saint Patrick’s Society. He served on the Village of East Riverside Council and on the Kennebecasis Valley Police Force Commission. Frank was a member of Our Lady of Perpetual Help Parish in Rothesay. Frank was especially passionate about the performing arts. Active in amateur theatre groups in Winnipeg and Oromocto, he also promoted Theatre New Brunswick (TNB), coordinating venues and ticket sales for its touring performances in Saint John. He once rehearsed and performed in one of TNB’s professional touring productions, during a leave of absence from the military. Frank enjoyed many close friendships over the years, often through his many professional and volunteer endeavors. Most of all, he was a devoted husband to Dee and a proud father to his sons. The family sincerely thanks all those who provided friendship, care and comfort to Frank over the years. We recognize with gratitude the dedication, friendliness and professionalism of the staff at Shannex in Quispamsis, and in the Emergency Department and 3CS at Saint John Regional Hospital. Resting at Brenan’s Funeral Home, 111 Paradise Row, Saint John, NB (634-7424) with visiting on Tuesday and Wednesday, July 24 and 25, 2018 from 2-4 and 6-8 PM. A Royal Canadian Legion Tribute Service will be held during visitation on Wednesday at 7 PM. A Mass of Christian Burial will be celebrated at Our Lady of Perpetual Help on Thursday, July 26, 2018 at 2 PM. Interment will take place in Holy Cross Cemetery at a later date. In lieu of flowers, remembrances may be made to United Way Saint John, Kings and Charlotte. Online remembrances and condolences may be placed at www.BrenansFH.com.