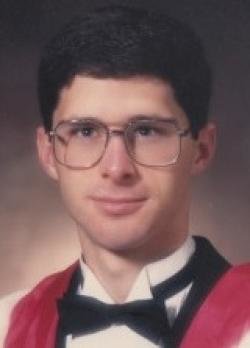 It is with heavy hearts that we announce the passing of Darrin Gray (1966-2018). He passed away peacefully at the Centre Hospitalier de l’Université de Montréal (CHUM) on July 18th, 2018. He fought a long battle against Huntington’s disease. Darrin is survived by his wife Madoka, son Zachary and father Gerald (Wendy). Darrin was predeceased by his mother Gail (2004) and younger sister Heather (2015) (Richard) (NZ), and grandparents Alfred & Mary Gray. Darrin was born in Saint John, NB on April 28, 1966 and spent ten years in Montreal as a young child before the family moved back to Saint John in 1977. He graduated from Saint John High School in 1984, where he made many close friends. He completed three years of his Bachelor of Engineering studying at the Royal Military College. He was then transferred to the University of New Brunswick to study Biochemistry, where he found the love for life science. He graduated as the top student, and continued on to graduate school with an NSERC scholarship. This is when he met the love of his life Madoka. Darrin also obtained his Bachelor of Education and taught at Grand Manan High School for one year. Darrin and Madoka got married in 1993 and their son Zachary was born in 1994. The family moved to Vancouver, BC in 1995. Darrin worked as a research assistant at the Biotechnology Laboratories (currently Michael Smith Laboratories) at University of British Columbia. The family wishes to thank the staff at the Huntington’s Society for the support Darrin received since moving to Montreal in 2003. The funeral service for Darrin was held in Montreal on July 22, 2018. Donations in Darrin’s memory may be made to www.huntingtonsociety.ca or toll free 1-800-998-7398

Share Your Memory of
Darrin
Upload Your Memory View All Memories
Be the first to upload a memory!