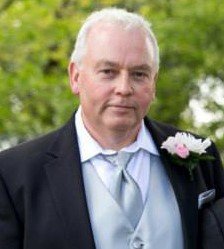 It is with great sadness that the family of Rory Allan Brown of 36 Neck Road, Summerville, beloved husband of Brenda (Bourque) Brown, announce his passing which occurred on Saturday, May 2, 2020 at the Saint John Regional Hospital.  Born on May 24, 1961 in Saint John, he was the son of the late Alexander and Dorothy (Jones) Brown.

Rory treasured the times spent with those he loved and will always be remembered as a loving and devoted family man.  He was employed as a pipefitter and was a proud member of the Pipefitters and Plumbers Union Local 213.  He took great comfort and peace in the outdoors where he enjoyed nature’s picturesque scenery, birdwatching and kayaking.  Rory was affectionately known as a “history buff,” seeking knowledge wherever he could.  He will be greatly missed.

In addition to his wife, Brenda, Rory will be lovingly remembered by his sons, Brandon (Melanie) of Alberta and Adam (Erin) of Summerville; sisters, Heather McGee (Donald) and Rosemary Wong (Paul) all of Grand Bay-Westfield; precious grandchildren, Dante, Mikayla and Domenick; mother and father-in-law, Carol and Leonard Carvell; sister-in-law, Doreen (Sheldon); brothers-in-law, Dwayne and Darrell (Bonnie); along with nieces, great-nephews and his adored Pomeranian, Carley.  Besides his parents, he was predeceased by his brother, Bruce.

Due to the current health advisories, a funeral service will be held at a later date. Arrangements are under the care and direction of Brenan’s Funeral Home, 111 Paradise Row, Saint John (634-7424).

For those who wish, remembrances may be made to the Heart and Stroke Foundation of NB or to the Saint John SPCA Animal Rescue.

Share Your Memory of
Rory
Upload Your Memory View All Memories
Be the first to upload a memory!