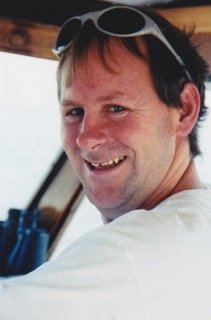 Mike Calnan passed away peacefully on July16th, 2020. Mike's adventurous life was lived to its fullest, and the best decision he ever made was to marry his incredible wife Krissy. She is his rock, and the glue that kept his Show together for all these years. It seems like Mike squeezed several lifetimes into his 55 years.

He was fiercely passionate about music and as a younger man, Mike spent years criss-crossing North America going to Dead shows. With friends or by himself, Mike was always game for a road trip. Anywhere, anytime. He also loved the water and boating, so much so that he left university to become a boat builder. A few years later, he graduated from college in Saint Andrews, and went on to ply his trade on fancy boats in the yacht clubs of South Florida for years. After Florida, Mike and Krissy moved back home to Saint John and once again he returned to school for years, this time graduating as a Power Engineer. This led to his new career as an operator with the Irving Paper Mill. Mike loved the friends he made there and they loved him too, accepting and enjoying him as that Fourth Hand of theirs that thought he was a First.

Mike loved spending time on the Saint John River, either on his classic wooden cabin cruiser Stella, or when sailing the beautiful sailboat that he built with his own hands. Mike was also an athlete, and a basketball star for St. Mac's. As a hockey player, Crazy Legs Calnan was a goal scorer. Prowling the left wing for the dominant Sharks and then for the legendary Alpines, opponents knew that they should keep an eye on Ole Crazy Legs.

Eight years ago, Krissy and Mike decided to continue the adventure and move to Edmonton. It was a great job opportunity for Krissy, and Mike welcomed the challenge of starting over again. Naturally, Mike had brand new best friends forever shortly after his arrival, and together they had a blast lighting up Edmonton. As far as work went, it didn’t take long for Mike to establish himself with BGIS, and although he says he liked the work, he often spoke about the awesome co-worker friends he had. Mike wanted all of his friends from both Brookfield and Local 907 from the Mill here in Saint John to know that he deeply appreciated all the love and support he felt from start to finish with this cancer battle.

Mike was quick witted and hilarious. He brought positive energy and laughter to every room he ever entered. He was a rock solid friend to all who were lucky enough to have known him. Quietly, he always lent a helping hand to people in need, whether you were a struggling friend or a stranger in the street. Whether you asked for help, or if he just knew you were hurting. Mike's entire life was all about good friends and his family, and he cherished both. They broke the mold when they made Mikey, and he will be missed.