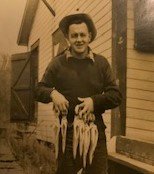 The death of Earl Kilpatrick Scott occurred on Friday, September 18, 2020 at his residence in the Loch Lomond Village. Born June 28, 1930 in Upham, NB, he was a son of the late Iva (Kilpatrick) and Leonard Scott.

Earl was an outdoorsman who was an avid hunter, fisher, and farmer.

Earl is survived by his son, Brian Scott (France Jean); daughter, Jennifer Moore (Michael); and grandson, Kenny Scott. Besides his parents, he was predeceased by his son, Paul; sister, Jean Shanks; and brothers, Wesley and Bert Scott.

Arrangements are under the care of Brenan’s Funeral Home, 111 Paradise Row, Saint John (634-7424). For those who wish, condolences may be placed at www.BrenansFH.com.

Share Your Memory of
Earl
Upload Your Memory View All Memories
Be the first to upload a memory!