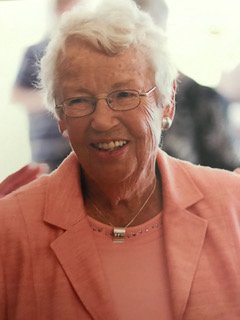 Phyllis Read (West) Sutherland passed away peacefully on April 10, 2021 at the Loch Lomond Village.  Phyllis was born in Sackville, NB on September 25, 1921, where she grew up and was proud to be a graduate of Mount Allison University.  Phyllis was the daughter of the late Frank and Marjorie (Bates) West.

As a teen, she attended Branksome Hall School in Toronto, where she had the opportunity to travel for the coronation of King George VI in 1937.  She was a dedicated athlete whose passion was curling. Phyllis loved to garden, golf and enjoyed many trips to various parts of the world with friends and family.

Phyllis was a member of Riverside Country Club and a past member of Thistle Curling Club.  In 1984 she was honoured as Builder of the Year by Curl Canada. In the 1970’s she and a group of very special friends started The Flea Market Ltd. in Saint John, which lasted for several years.  She spent many days with her family boating on the Saint John River or along the eastern coast of Canada and the United States.

Phyllis was also a member of the Canadian Dietetic Association and an active member of the UCW at Saint David’s United Church.  She was an avid reader and a devoted bridge player, who loved socializing with her many friends and enjoyed the occasional Crown Royal on the rocks with a splash of water.

Due to the COVID-19 pandemic, a service will be held at a later date when family and friends can gather.  Donations in Phyllis’ name may be made to the Saint John Regional Hospital Foundation or a charity of the donor’s choice.   Arrangements are under the care and direction of Brenan’s Funeral Home, 111 Paradise Row, Saint John (634-7424).

Share Your Memory of
Phyllis
Upload Your Memory View All Memories
Be the first to upload a memory!