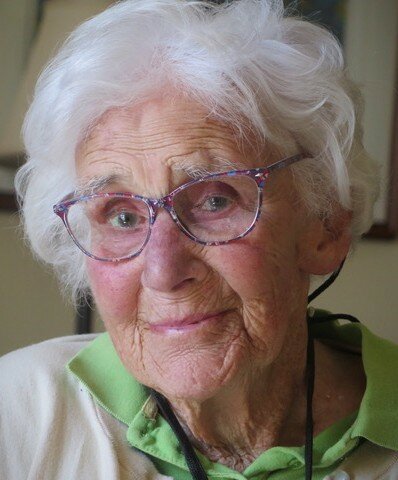 After a long and fulfilling life, our mother, Ada Hazen “Stit” Inches, passed away peacefully on August 29, 2021.  Born at home in Rothesay 101 years ago, she was one of four children born to Hugh "Buff" Mackay and Katie Hazen Mackay.

Mum graduated from Netherwood School and went on to earn a Bachelor of Library Science from McGill in 1942.  Later that year, she joined the Women’s Royal Canadian Naval Service (Wrens) and served overseas in Newfoundland and Great Britain.  She was discharged with the rank of Lieutenant in 1946.

Mum was an athlete having been an avid tennis player and sailor in her youth.  She had a passion for the outdoors that became an important part of all of our lives.  She was always concerned for the less fortunate.  Among the most meaningful to her was the work and the close relationships she developed over the many years volunteering with the Girl Guides of Canada as well as the more than 30 years with the Saint John Community Food Basket.  She deeply cherished her time on the Long Reach and the neighbours, friends and family that surrounded her while there.

The family wishes to thank the entire staff at Embassy Hall, Shannex in Quispamsis for their dedication and compassion.  We deeply appreciate the attention and care that was provided to our mother and our family throughout her stay.  The family also thanks Linden Guillermo for her years of dedication to, and care, of our mother.

Arrangements are under the care and direction of Brenan’s Funeral Home, 111 Paradise Row, Saint John (634-7424) where visitation will be held on Thursday, September 2 from 6:00 - 8:00 PM.  The funeral service will be held from St. Paul’s Anglican Church, 4 Church Avenue, Rothesay on Saturday, September 4 at 11:00 AM with a reception immediately following the service in the church hall. For those unable to attend, the service will be livestreamed via the Brenan’s website and will also be available for later viewing on the same site.

The family requests that all those wishing to attend the visitation, service and/or reception be fully vaccinated.

In lieu of flowers, donations may be made to the Saint John Community Food Basket or the charity of your choice.  Online donations and condolences may be placed at www.BrenansFH.com.

Share Your Memory of
Hazen
Upload Your Memory View All Memories
Be the first to upload a memory!