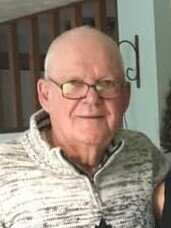 It is with great sadness that the family of Tony N. McGuire announces his passing which occurred on Monday, October 11, 2021, at Bobby’s Hospice. Born in Renforth, on April 19, 1939, he was a son of the late Neil and Mary (Crozier) McGuire.

Tony was proudly born and raised in Renforth (The original Fox Farm). He graduated from St. FX and UNB and went on to teach at Aberdeen School. He then became the principal of MacDonald Consolidated School. After his teaching career, Tony started a construction company with his brother, Bill, which they named “McGuire Brothers Construction”.

He was a Lifelong member of The Kennebecasis Lions Club and the former Mayor of Renforth during the mid-80’s. While Tony attended St. FX, he played soccer and hockey and became a standout defenseman on the X-Men for 4 years, they went on to win the Maritime Championship in 1963. He also played a huge part in winning the Hardy Cup with the Saint John Mooseheads in 1973, as a 34-year-old veteran defensemen. After his senior career he went on to play for the Moosehead Old Timers until he was 61. That Moosehead team was one of the top Old Timer’s team in Canada during the 80’s as they traveled each year to play in tournaments such as Fitchburg Massachusetts, Florida, San Diego, and Copenhagen. The Mooseheads had an annual fundraiser at the Bill McGuire Centre called the New Year’s Eve Lobster Stag.

The family would like to thank the KV Extra Mural team, Dr. Wildish, Dr. Love, the Palliative Care team, and the staff at Bobby’s Hospice.

Arrangements are under the care and direction of Brenan’s Funeral Home, 111 Paradise Row, Saint John, NB (634-7424) with visitation on Friday, October 15, 2021, from 2:00-4:00 PM & 6:00-8:00 PM. A Mass of Christian Burial will be held from Our Lady of Perpetual Help Church (31 Gondola Point Rd, Rothesay) on Saturday, October 16, 2021, at 2:00 PM. Interment to follow in St. Patrick’s Cemetery. Due to Covid-19 health measures placed on indoor gatherings by the Government of New Brunswick, all those 12 and older attending the service will be required to show proof of vaccination and a piece of a government-issued ID or proof of medical exemption. Donations may be made to The Kennebecasis Lions Club Scholarship Foundation. Online condolences may be placed at www.BrenansFH.com

Share Your Memory of
Tony
Upload Your Memory View All Memories
Be the first to upload a memory!