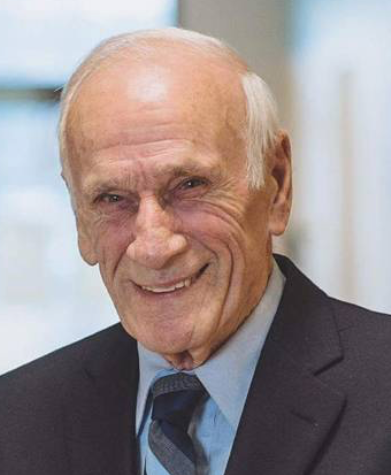 It is with great sadness the family of H. Walter Kingston, husband of Marjorie (Spinney) Kingston, announce his death on October 15, 2021 at Kennebec Manor after a period of failing health. Born July 19, 1934, in Saint John, NB, he was the son of the late Harry and Alexa (Carter) Kingston.

Walter grew up on Murray Street in the North End of Saint John, with ten brothers and sisters. He was the last surviving member of his immediate family. Walter was very active in sports in his youth, enjoying basketball, baseball, and football. Known for being strong willed and stubborn, he was given the nickname Moose. In later years he loved to reminisce about the Old North End. He never forgot where he came from.

Walter began his career in refining in the early 1960s, and was integral in the running and expansion of the Irving Oil Refinery. Responsible for the day-to-day operations and maintenance, as well as the project manager on many construction projects. His expertise was acknowledged by the National Petroleum Refiners Association as he was asked to participate as an expert on the Q&A panel at the annual convention on several occasions.

After leaving the refinery in the early 1990s he became a sought-after consultant in the refining industry around the world. His work took him across North America, South America, Europe, Africa, and the Middle East. Although he travelled to many wonderful places, he was always so happy to return home. He would sit on his deck which overlooked the Kennebecasis River, and say “there is no better place than this”. Walter was a hard worker, and was still gardening in the days prior to his hospitalization. No less on two artificial knees! He left his gardens looking beautiful.

Walter underwent two knee replacement surgeries, a back surgery, and  a complicated lifesaving heart surgery in 2011. He was so thankful to the doctors and medical care he received at the Saint John Regional Hospital, that he became an avid supporter and donor of the SJRH Foundation and the NB Heart Centre. You may have seen his photo that was around the hospital in support of the Give. Walter believed in giving back, and quietly supported many people in need over the years. He was very caring, and quietly generous.

The family would like to thank and extend our heartfelt appreciation to Dr. David Bewick, Dr. Rand Forgie, and Dr. James Wagg; your dedication and expertise gave Walter ten additional years. A special thank you to Dr. Josh Tracey and pharmacist Ryan Kennedy; the dedication, compassion, and patience you extended to Walter was above and beyond. You held a special place in his heart. Also, thank you to the staff at Kennebec Manor that cared for Walter in his final days. We will be forever grateful to his primary caregivers Della, Shannon, Amanda, Linda, and Vanessa that showed him such kindness, and provided Walter exceptional care; as well as many others that we never had the privilege of getting to know.

Arrangements are under the care and direction of Brenan’s Funeral Home, 111 Paradise Row, Saint John, NB (634-7424).  The family would like to invite all friends and family to a  graveside service which will take place on Thursday, October 21, 2021, at 1:00 PM in Cedar Hill Extension Cemetery. Please follow COVID-19 protocol. For those unable to attend, the service will be live-streamed and can be viewed by visiting Walter's obituary on Brenan's website. For those who wish, condolences may be made by visiting www.BrenansFH.com. Donations in Walter’s memory may be made to Kennebec Manor, the SJRH Foundation, or a charity of the donors choice.