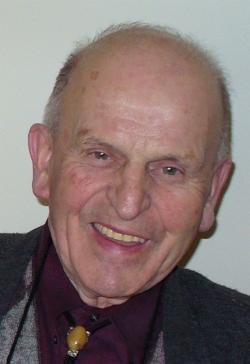 Ejgild "Gild" Kirkegaard of Quispamsis, husband of Barbara Jane (Leslie) Kirkegaard, passed away on February 24, 2018 at Kingsway Care Centre. Born in Vemb, Jutland, Denmark on April 27, 1928, he was a son of the late Søren Kristian and Erna (Skovhede) Kirkegaard. Gild attended formal school and Business College in Copenhagen, and served in the Danish Army 1st Battalion Infantry from 1949-1950. He also had formal training in 1951 in Denmark’s NATO Alliance Forces, just prior to emigrating to Canada in November of 1951. Upon arrival in Canada, Gild worked in a number of different businesses as a selling agent including Electrolux Canada and the Canada Life Assurance Company. He married his wife, Barbara, in 1956. They, with their five children, operated several food outlets including a restaurant on Thorne Avenue, a small lunch counter in Rothesay, and a canteen for a number of years on the Saint John Exhibition grounds. The family established and operated "Mothers Inn" at 700 Rothesay Avenue for 20 years, until 1987. Gild subsequently went to work for Central Trust Real Estate, and in 1993 joined Canada Trust/Prudential Property Specialists. Gild was deeply involved and committed to his church. He was Superintendent at Glen View United Church Sunday School in the early years of marriage. Three years later the family moved to St. Andrews, returning to East Saint John in 1962, where Gild and the whole family became very involved with Park Avenue United Church. Gild was Sunday School Superintendent for many years, and served on the Board and a member of Session for most of the next 20 years. In 1982, Barb and Gild transferred membership to the Church of St. Andrew and St. David on Germain Street; Gild currently was a member of the Kennebecasis Baptist Church. He was a former member of the Kiwanis Club of St. Andrews, and served for a number of years on the advisory board of the Salvation Army and often helped out in a number of other community efforts when called upon. Gild and his family visited his native Denmark several times over the years. He loved and enjoyed his family and extended family, second only to his God, whom he tried to serve to the best of his ability. In addition to his wife, Gild is survived by five children, Rev. Hugh Kirkegaard (Dr. Lois McGibbon) of Bedford, NS, Rev. Daniel Kirkegaard (Sandra Hook) of Delta, BC, Annalise Larsen, Rebecca Kierstead (James) and Katrina Lee (Brian), all of Quispamsis; 15 grandchildren; 13 great grandchildren; and several nieces and nephews. Gild was one of nine sons, all of whom remained in Denmark. He is survived by Neils, Jørn, Knud, Per, Bent and was predeceased by his loving parents; brothers Egon, Olav and infant brother, Vagn. Resting at Brenan’s Funeral Home, 111 Paradise Row, Saint John (634-7424), with visitation on Tuesday, February 27, 2018 from 2-4 and 6-8 PM. The funeral service will be held on Wednesday, February 28, 2018 at 11:00 AM from the Kennebecasis Baptist Church. Interment will take place at Fernhill Cemetery. For those who wish, donations may be made to L’Arche Saint John, Kennebecasis Baptist Church, or the Salvation Army. Online condolences and remembrances may be placed at www.BrenansFH.com.

Share Your Memory of
Ejgild
Upload Your Memory View All Memories
Be the first to upload a memory!