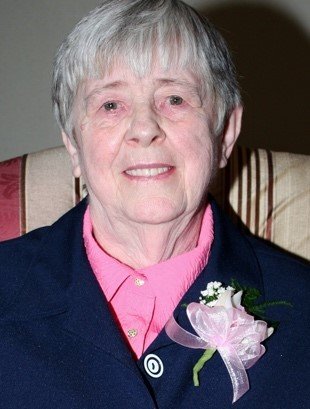 Sister Theresa Irene Coyle (Sister M. Amy) died peacefully at her home, Ruth Ross Residence in Saint John, NB on Thursday, May 28, 2020.  Born in Saint John on May 19, 1933, she was the daughter of the late Gerald and Jean (Arbing) Coyle.

Educated at Holy Trinity School and a graduate of St. Vincent’s High School, Sister Theresa entered the Sisters of Charity of the Immaculate Conception on February 2, 1953.

Following her novitiate, she received her NB Teacher’s License in 1955 and began her teaching ministry at Assumption, St. Pius X and Holy Trinity Schools in Saint John.

In 1971-1977, Sister moved to the west coast and taught at Sacred Heart, Vancouver and Holy Cross and St. Michael’s in Burnaby, BC.  After completing canon law studies at Saint Paul University in Ottawa, in 1978 she returned to Saint John and served on the Diocesan Matrimonial Tribunal for ten years.  Sister then ministered in Fredericton and Digby, NS as well as library and archive work in Saint John.

Sister was also involved with pastoral care for several years at the former St. Vincent’s Convent.

Sister Theresa was known for her kindness and understanding towards her many students as well as her positive attitude and sense of humour.

She was predeceased by her parents, Gerald and Jean; her sisters, Jean, Shirley, Barbara, Dorothy (Hutchinson), Audrey, Mary and brother, Patrick.

She is survived by her sisters, Geraldine Coyle, Pauline Coyle and Sister Margaret Coyle, scic.

Arrangements are under the care of Brenan’s Funeral Home, 111 Paradise Row, Saint John (634-7424).  Due to the current health restrictions, a service will be held at a later date.  Interment to take place in St. Joseph’s Cemetery, Saint John on Monday, June 1, 2020.

Share Your Memory of
Sister Theresa
Upload Your Memory View All Memories
Be the first to upload a memory!