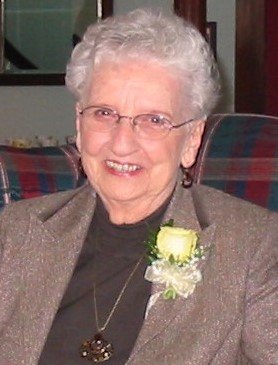 With sadness, the family announces the death of their dear aunt, Marie Theresa Phelan, ( Aunt Tess ) wife of the late Thomas Byron Phelan on June 27, 2020, at her home, Loch Lomond Village, in Saint John, N.B. Theresa was born at Saint John, N.B. On March 3, 1927, the youngest child of Walter and Helen (Kean)  Gorman. She was the last surviving member of her immediate family. Although she and Byron had no children, they loved their many nieces and nephews and took great pleasure in their many activities.

Theresa was a graduate of St. Vincent’s High School and the Provincial Normal School. She taught school for many years in Saint John. After their marriage, she and Byron moved to Halifax for Byron’s work. While in Halifax, Theresa was a much sought after supply teacher at many schools. In later years in Halifax Theresa worked at Sears Catalogue Sales as a team leader. Theresa and Byron enjoyed their time in Halifax and Theresa’s mother came to live with them and there were many visits to Halifax from the Saint John family.

Byron’s work took them to Charlottetown and they opened their home once again to many visitors from “home” to the Island. On retirement, Theresa and Byron retired to Gondola Point, N.B. They enjoyed their retirement years with traveling, square dancing, ballroom dancing groups. When Byron’s health deteriorated, they moved to Fort Howe apartments, where they enjoyed the company of family and friends. Theresa was a faithful member of over 50 years, in the Catholic Women’s League of Canada, in all the communities where she resided.

Besides her parents and husband, Theresa was predeceased by her sisters, Sister Lois Gorman, SCIC, and Catherine Murray ( Gerard )of Saint John,  her brothers, Walter and Donald (Alice), of Saint John, Brother Gerard(Paul) OMI, New York, and William Harry (Kay) Chicago, Illinois. She was also predeceased by her niece Christine Murray ( David Wilson)

She is also survived by many great and great-great nieces and nephews, cousins as well as her special cousin, Mary Lou Joyce of Saint John.

The family of Aunt Tess is very thankful to the staff of Loch Lomond Village for their care and kindness to her over the last five years. Funeral arrangements are under the care of Brenan’s Funeral Home,111 Paradise Row, Saint John, NB (634-7424). Visitation will be held on Saturday, July 4, 2020, at Our Lady of Perpetual Help from 10:00 - 11:00 AM. A Mass of Christian Burial will follow visitation at 11:00 AM. Donations in Theresa's memory can be made to The Loch Lomond Villa Foundation or a charity of the donor's choice. Online condolences may be placed at www.BrenansFH.com

Share Your Memory of
Marie
Upload Your Memory View All Memories
Be the first to upload a memory!