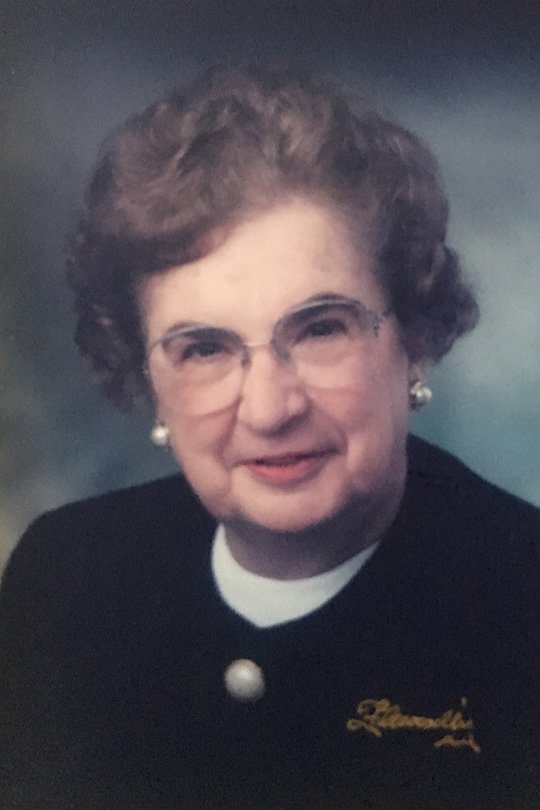 Joan McKelvey passed away July 2020 at the Church of Saint John and St. Stephen nursing home in Saint John. Born in Rothesay, she was the daughter of Norah Lee Robinson and the John Coles Belyea.
Joan studied at MacDonald College, (Montreal), for a year before attending Mount Allison University, where she graduated with a degree in Home Economics. She taught Home Economics in Windsor, Nova Scotia before marrying. As she often reminded us, she was forced to quit teaching as married women were not allowed to teach there at that time.
Neil and Joan settled in Millidgeville where they raised their sons and traveled the world with Saint John proudly as their base.
Joan was an intelligent woman who was connected with the world around her.  An avid reader, she keenly followed the politics of the day. She was devoted mother and grandmother. She enjoyed an afternoon of bridge with friends. She seemed to endlessly knit toques for the Seaman's Mission. Joan lived a long and full life with wonderful friendships, much-loved children, grandchildren, and great-grandchildren.
Survived by her sons Peter (Barb) and Roger (Cathy), grandchildren Fen (Jill Witt), Ian (Colleen Muir), John, Patrick (Kate Montgomery) as well as great-grandchildren, Wallace, Duncan, Harriet, George and Claire. She was predeceased by her husband Neil, sister, Ann Ramsay and brothers Peter and Jim Belyea.
Arrangements are under the care and direction of Brenan’s Funeral Home, 111 Paradise Row, Saint John, NB (506) 634-7424. A memorial reception will be held at the Union Club, 125 Germain Street from 5-7 PM, Friday, July 17. A private memorial service will be held at a later date. A special thanks to the staff of Chateau Champlain and the Church of Saint John and St. Stephen nursing home. Online condolences may be sent or viewed to: http://www.brenansfh.com/