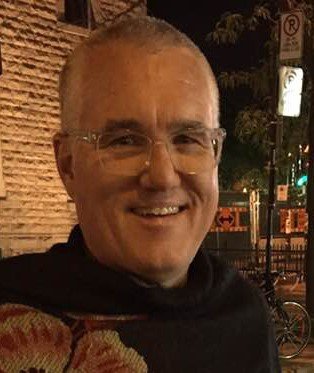 It is with great sadness that we announce the death of Richard Murray Vaughan.

Born in Saint John, NB on March 2, 1965, Richard was the son of the late Murray and Dorothy Vaughan (Loughery). He is survived by his older brother Paul (Lorie) of Nauwigewauk; his niece Tricia Shannon (Chris) of Kingston; nephew Ryan Vaughan of Saint John; and nephew Tyler Vaughan of Moncton.

Richard was raised in Quispamsis and, during his early years, spent his summers at the family home in St. Martins. After graduating from KVHS in 1983 he attended UNB Saint John where he earned his bachelor's degree in English. After a short period of time working odd jobs in Montreal, he returned to his home province where he obtained his master's in English from UNB Fredericton.

Richard began his professional life as an artist shortly after moving to Toronto in 1991 with the help of the Buddies in Bad Times theatre where he first found his voice as a playwright.  From those humble beginnings until just days before his passing, Richard, better known as RM Vaughan, was a prolific contributor to Canadian Arts and Culture as a novelist, poet, video-artist and was a well-known culture critic for the Global and Mail and the National Post. Most recently Richard's work brought him back to New Brunswick as Writer in Residence for UNB Fredericton where he was helping to inspire the next generation of Canadian writers.

For those closest to Richard, he will be remembered for the hand-written letter and post cards, the quirky little trinkets that would arrive in the mail, and wonderful crafts he loved to make for all occasions, but especially for Halloween.

Adapted from a poem by RM Vaughan…

What Richard Left Behind

you cannot measure or weigh

or pick up with your hands.

It is invisible, like a warm wind on your face

or a smile behind a scarf _

but it is just as welcome, just as sincere

Arrangements are under the care and direction of Brenan’s Funeral Home, 111 Paradise Row, Saint John, NB (634-7424). In keeping with Richard's wishes, a private family ceremony will take place. A celebration of life for Richard will be held later. Details to be announced. For those who wish, donations can be made to the "RM Vaughan Memorial Fund"  Development and Donor Relations University of New Brunswick Fredericton or to the New Brunswick Mental Health Association. Online condolences may be placed at www.BrenansFH.com