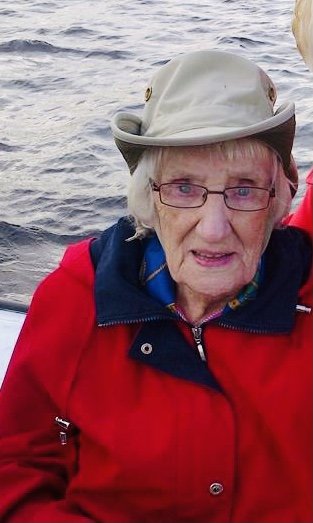 It is with great sadness that the family of Hazel Jean MacNamara announces her passing which occurred on January 6, 2021, at Rocmaura Nursing Home. Born in Saint John, NB, on June 19, 1922, she was the wife of the late Russell M. MacNamara and a daughter of the late Hartley and Ann (Bedborough) Mollins.

Hazel was a member of the former St. Paul’s (Valley) Church and then became a member of Trinity Church. She was employed by CN Rail and was an avid reader and belonged to several bowling leagues over the years. She was also a member of the RKYC for over 60 years and enjoyed racing and cruising with Russell on their sailboat “Siboney”.

She is survived by her brother, David (Joan) Mollins of Winnipeg, MB; two special nieces, Glenda Belyea and Lynn (James) Quigley; sister-in-law, Margaret Cobham-Mollins; as well as several other nieces and nephews.

Arrangements are under the care and direction of Brenan’s Funeral Home, 111 Paradise Row, Saint John, NB (634-7424). A private family service will be held on Saturday, January 9, 2021. Those unable to attend are welcome to view the service via Livestream beginning at 12:00 PM. Interment will take place in Fernhill Cemetery. Donations can be made to a charity of donor’s choice. Online condolences may be placed at www.BrenansFH.com

Share Your Memory of
Hazel
Upload Your Memory View All Memories
Be the first to upload a memory!