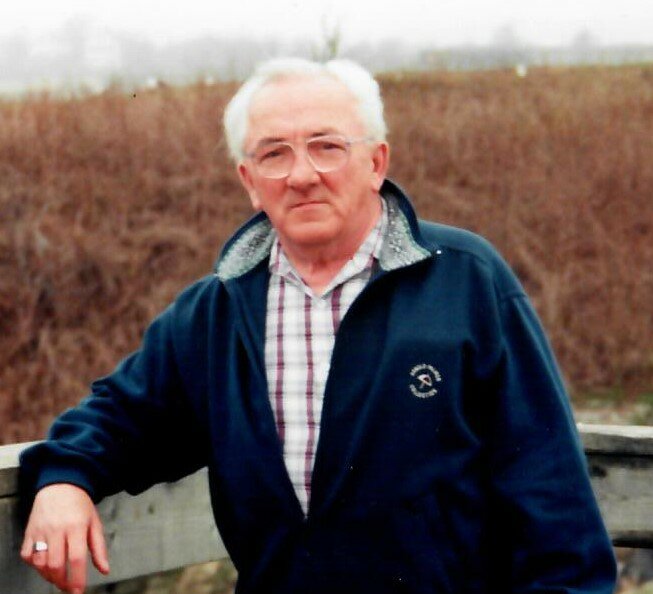 Robert (Bobby) Edward Wallace, 84, of Saint Lazare, Quebec and formerly of 319 Colin Avenue, Saint John, New Brunswick, the husband of the late Christena (Smith) Wallace, occurred after a brief stay at the Palliative Care Residence in Hudson Quebec on Saturday, October 16, 2021. Bob was born February 17, 1937, in Saint John, NB the son of the late William and Ethel (Duffy) Wallace.

Bob will be dearly missed by all who knew him.  He was an incredible kind and loving man with a great sense of humour who loved to tell stories.  The wilder the story the more laughs he would get.  His laugh was infectious and his teasing relentless.

He loved to watch movies, the Jason Bourne series was a main staple in the Wallace household and became a subject of many of Bobby’s stories.  He was an avid sports fan, who enjoyed football, hockey, tennis and golf.  He loved to play cards and was known to change the rules from time to time.  He had a great love of animals and will be greatly missed by Patches, Maxx and Mollee.

Bob was an electrician by trade and had his own electrical contracting business for years, after closing the business he went on to be an Electrical Inspector for the Province of New Brunswick.

Bob was a devout catholic who was very active with the Cathedral of Immaculate Conception Parish, having served on the Parish Council and later becoming a lay minister.  He developed life-long friendships with the members of the clergy and fellow parishioners that he served with.  He spent 10 years serving in many capacities with Monsignor Joseph Woods and later in life he became a lay minister serving with Monsignor Brian Henneberry for 12 Years.   The church was his second home and he developed life long friendships with many of the clergy but had a special friendship with Msgr Joseph Woods and Msgr Brian Henneberry.   Our family is grateful for the continued spiritual guidance that Msgr Henneberry provided to Bobby when he moved to Montreal.

The family is thankful for the great care and incredible support provided by the staff of the Vaudreuil-Solanges CLSC Home Care Services, the staff of the Palliative Care Residence in Hudson Quebec and to Patricia his caregiver.

Arrangements are under the care and direction of Brenan’s Funeral Home, 111 Paradise Row, Saint John, NB (634-7424) Visitation will take place on Wednesday, October 27, 2021, from 3:00 – 7:00 PM. A Mass of Christian Burial will be held on Thursday, October 28, 2021, at 11:00 AM, at Holy Redeemer Parish (St. Pius X). Interment will follow in St. Joseph’s Cemetery. Due to Covid-19 health measures placed on indoor gatherings by the Government of New Brunswick, all those 12 and older attending the service will be required to show proof of vaccination and a piece of a government-issued ID or proof of medical exemption. In lieu of flowers, donations can be made to the Cathedral Restoration Project or a charity of the donors choice.  Online condolences may be placed at www.BrenansFH.com